At the beginning of the game, each player receives five cards, while another card is placed as the discard pile. The remaining cards make up the deck from which to draw cards. The game starts clockwise but can later change the direction of play by using reversal cards (Joker). The first card on the discard pile is considered the first card played by the dealer.

If a player has two or more cards of a rank in his hand and can play the first one, they may then discard all other cards of that rank immediately. Special cards (e.g., wish or skip card) are excluded from this.

If a player plays a suit wish card (Ace), they may choose the suit that the next player must serve. Wish cards may be stacked regardless of the chosen suit, and a new suit may be determined by the next player.

If a player plays a rank wish card (Jack), they may choose the rank that the next player must serve, e.g., 8 or Queen. Again, the rule applies that the wish cards may be stacked regardless of the chosen rank and a new rank may be determined by the next player.

IMPORTANT: Suit and rank wish cards cannot cancel each other out. This means that a suit wish cannot be made if a previously made rank wish has not yet been fulfilled and vice versa.

When a 2 or 3 is played, the following player must draw two or three cards accordingly. Alternatively, they can play a draw card regardless of color or rank (2, 3) and pass the draw obligation on to the next player. The sequence continues until a player can no longer play and must pick up the sum of the cards. If a player can place a Queen of Hearts on top of the draw cards, they stop the current draw sequence and do not have to pick up any cards themselves. 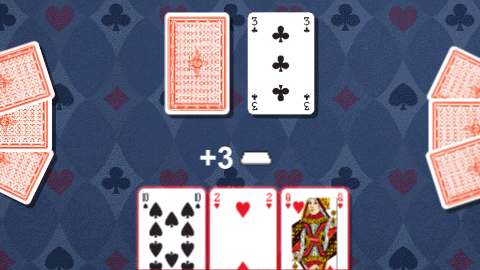 If a skip card (4) is played, the following player is not allowed to take any action. Their turn is skipped and the player after them continues. Alternatively, the player may play a skip card themself and pass on the effect.

If a player cannot play, they must pick up a card from the deck. Once the deck is empty, the discard pile is reshuffled except for the top card and placed again as drawing deck. 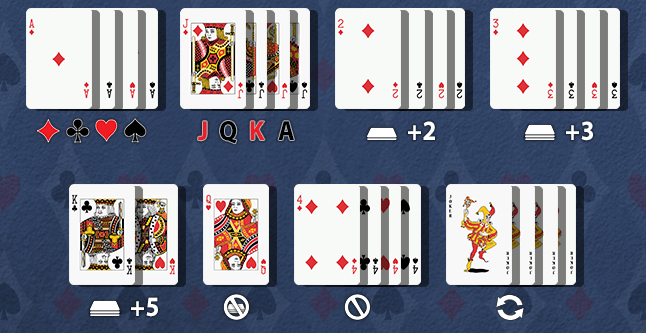 Round End and Winning

When playing the penultimate card, the player must announce that they have only one card left in hand by saying "Macau". If a player fails to do so, they must draw five cards as a penalty.

The round ends when someone has played all the cards in their hand. The player without cards gets one winning point, all other players get no points. The game ends when a player first scores two winning points and thus wins.