The game is played on an 8×8 board with disc-like gaming pieces that have a black and a white side.

At the beginning of every game four pieces, two black and two white, are put in a definite starting position in the center of the board.

They must place a piece with the black side up on the board in such a position that there exists at least one straight (horizontal, vertical, or diagonal) occupied line between the new piece and another black piece. One or more contiguous white pieces have to be between them. This way the player “outflanks” their opponent. 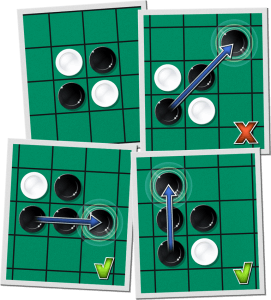 After placing the piece, black turns over all white pieces lying on a straight line between the new piece and any anchoring black pieces. All reversed pieces now show the black side, and the black player may use them in later moves.

Now it is the white players turn. They operate under the same rules with the roles reversed. The player lays down a white piece, causing one or more black pieces to flip. 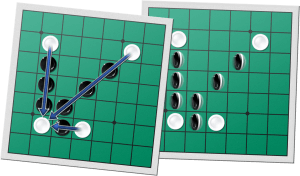 Both players take alternate turns. Moves that do not cause the flipping of the opponents pieces are not valid. If one player cannot make a valid move, play passes back to the other player.

The game ends when the board is full of pieces or when neither player can make a valid move. The player with the most pieces on the board at the end of the game wins. 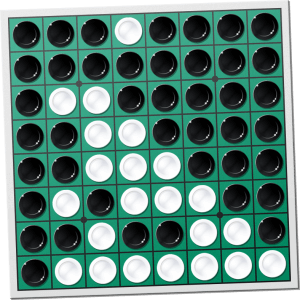 You can download the official mobile version of Othello here: Othello app by LITE Games