Our version of Checkers is based on the rules of the Brazilian Checkers game, which are derived from the international rules.

The following rules apply:
– Capturing is mandatory
– Backward captures are allowed
– Flying Kings (Kings can move freely at any time)

All of the rules also apply to multiplayer matches, with exception to player colors which are assigned at random each match.

Each player receives points based on the outcome at the end of a quick game:

– The loser receives no points

– In case of a draw each player receives 1 point

Matches against friends do not award points for the leaderboard.

Introduction & Object of the Game

The board has a size of 8×8 (64) squares. Each player controls one of the piece colors, white or black. White is the default color at the beginning. Draws are made alternately. In each round the players must move one of their checkers. White always begins. The winner is the player who captures all of their opponent’s pieces or positions their own pieces in such a way that their opponent can no longer move.

Exception: If both opponents have played 20 moves without a capture, the game automatically ends in a draw.

There are two different types of game pieces:
– Men: These are the pieces at the beginning of the game.
– Kings: These pieces were previously Men and were promoted in the course of a game round.

Pieces can only be moved on the free dark squares of the board. The type of piece and move determines how far and in which direction a piece can move. Pieces cannot jump over other pieces of the same color.

A Man can be moved one square diagonally forward to any empty space in the next row. 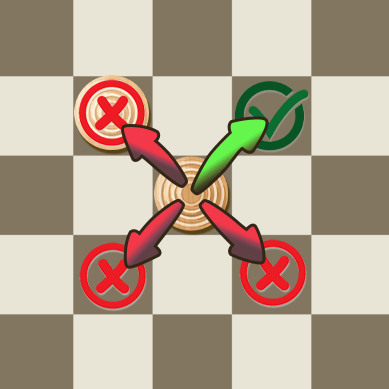 When a Man finishes its move in the last row (at the top/bottom of the screen), it is promoted to King. If it only touches the square during a multiple-capture move but does not stop, it is not promoted.

Kings can be moved forward and backward to any empty space between them and the first occupied space on the diagonals they are currently on. 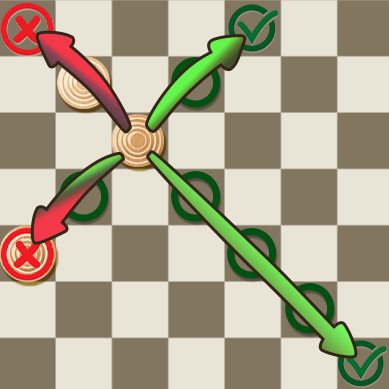 The capture of an opponent’s piece can take place forwards and backwards. Capturing counts as one move.

If capturing on the board is possible, it must be done. This is referred to as a mandatory capture.

If there are several possibilities for capturing on the board, the variant that removes the highest number of opponent pieces must be chosen.

If a Man is next to an opponent’s piece behind which lies an empty square diagonally, it must jump over this piece and occupy the empty square. 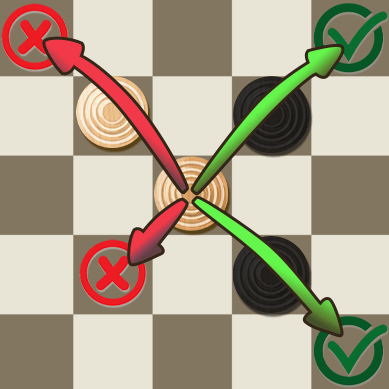 If a Man has the opportunity to capture several opposing pieces at the same time, it must complete the entire capture sequence. After the last jump it must occupy the empty space behind the last stone captured. 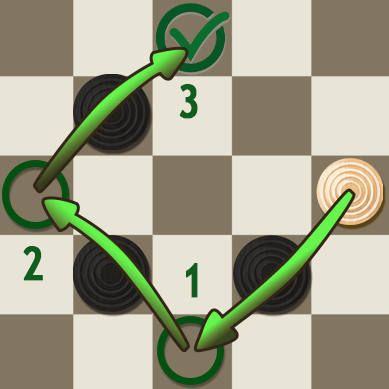 If a King encounters an opponent’s piece behind which one or more spaces are empty on the same diagonal it occupies, it must jump over it and can occupy a free space of its choice behind it. 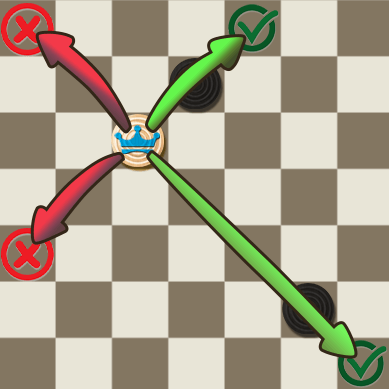 If a King has the opportunity to capture several opposing pieces at the same time, it must complete the entire capture sequence. After the last jump it may occupy any space in the diagonal. 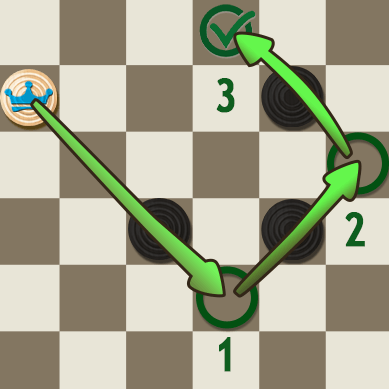